Komedy in the Kiln returns this May! 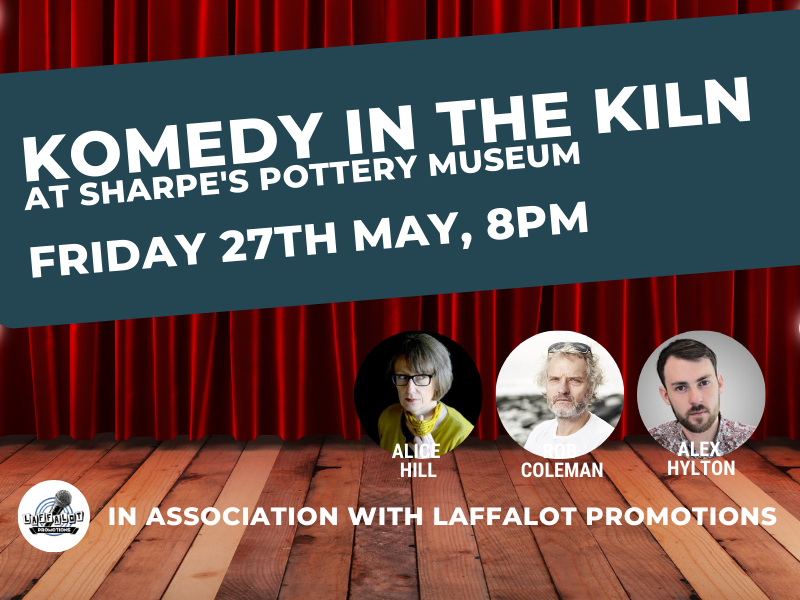 After the success of the first session last month, ‘Komedy in the Kiln’ returns to the historic Grade II listed bottle kiln of Sharpe’s Pottery Museum, Swadlincote on Friday 27th May, 8pm! Sharpe’s, in association with Laffalot Promotions will be bringing established Edinburgh Fringe acts to Swadlincote for an evening full of entertainment! Featuring Rob Coleman, Jane Hill and Alex Hylton.

Rob Coleman will be your MC for the evening. Rob has been a semi-pro stand up for 10 years or so, closing, opening, and middling his way around the country with a mix of beautifully written gags and tru-ish stories, together with some audience banter. He’s a very experienced MC, able to compere both ‘nice’ rooms and rowdy weekend clubs!

Rob has recently become the resident MC at Stamford Arts Centre Along the way he’s learned life lessons such as – ‘never take a first date to watch you perform comedy’ and ‘there are no 24 hour petrol stations in rural Wales.’ He has become increasingly grumpy and my comedy focuses on (amongst other things) politeness, getting old and the joys of long term relationships. Away from stand up, he recently rowed across the Atlantic, becoming a world record holder in the process, and lives on a farm in rural Leicestershire.

“Jane Hill got up and proved exactly why she is a firm favourite of the JUICE Family. She is incredibly charming and lovely, puts the audience at ease with her wonderful speaking voice and middle-class manner. She is then able to subvert this image beautifully with some well-crafted dark material.” Rob Halden, Juice Comedy

Tickets are on sale now at £15 per person here. Snacks and drinks will be available to purchase from Sweet Caroline at Sharpe’s from 6pm and during the interval. Don’t miss out on what promises to be a fantastic evening of ‘Komedy in the Kiln”. Here’s what our previous attendees thought of the evening!

“Komedy in the Kiln could become a cult venue for comedians” / “A great venue and great comedy” / “Was a top night!” / I’d never been to a Stand-up gig before. We absolutely loved it and can’t wait to come back!”.

To find out more about Sharpe’s Pottery Museum, opening times and its events programme, visit www.sharpespotterymuseum.org.uk or follow Sharpe’s on its social media pages.