Iconic Photograph at the heart of Sharpe’s Pottery Museum 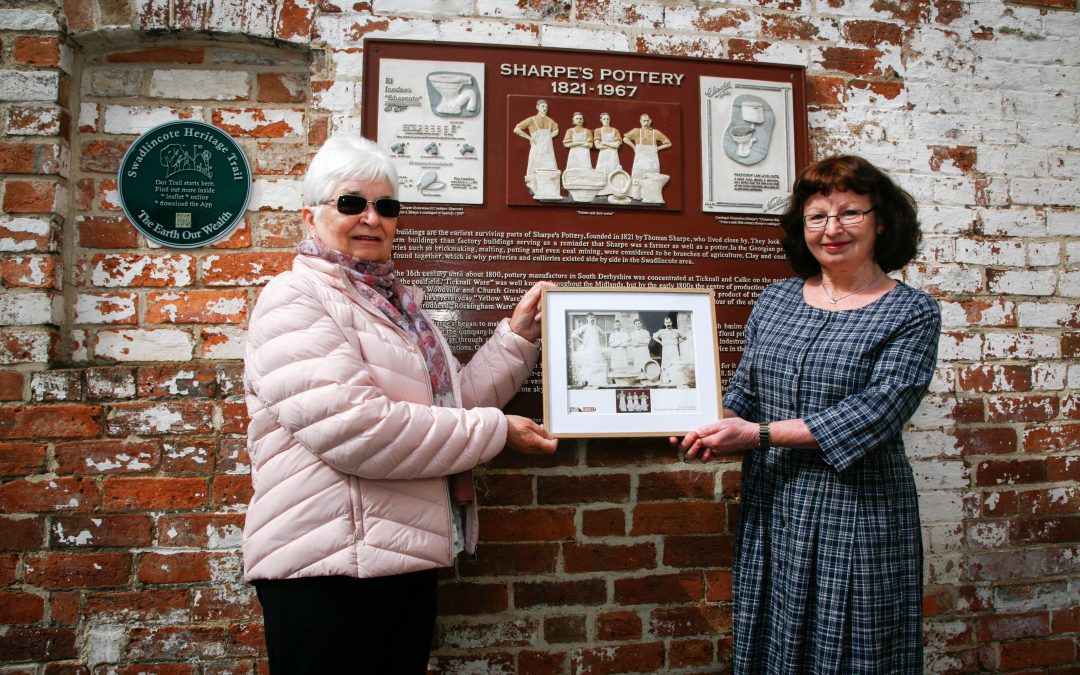 Until this week Jacky Jones, Trustee at The Magic Attic, only had a small postcard size photograph of her great grandfather John Thomson who worked as a potter at Sharpe’s Pottery in Swadlincote.

John Thomson was born in Glasgow in 1869. He came down from Glasgow sometime between 1871 & 1881 with his father Archibald, who was also a potter. Together with his wife Emma he also kept The Arthcote Inn, Swadlincote from 1918 – 1938, still working as a Pottery presser at Sharpe’s Pottery. John died in 1949 & is buried at York Road Cemetery, Church Gresley.

On the iconic plaque celebrating ‘Potters and their wares’ outside Sharpe’s Pottery Museum in Swadlincote John Thomson can be seen, together with three of his pottery colleagues. (John is second from the left.)

Thanks to Trustees at Sharpe’s Pottery Museum, Jacky Jones is now the proud owner of a customised framed picture of her treasured great grandfather who, along with many other local craftsmen and women helped put Sharpe’s Pottery firmly on the worldwide map for the invention of the flush rim toilet, (which is still in use today) and global success for the sales of sanitary ware.

Jacky Jones, Trustee at The Magic Attic said, “we would just like to thank Sharpe’s Pottery Museum for the kind gift of the framed photograph of my Great Grandfather who worked at the pottery. I have always felt very proud that my photograph had played a part in the design of the enamel plaque and the picture now holds pride of place in our home.”

Maria Picken, Chair of Sharpe’s Pottery and Heritage Arts Trust said, “we were very pleased to be able to enlarge the original image and present it to Jacky in a framed picture that can be looked at and enjoyed by all the family.”

Sharpe’s Pottery Museum is celebrating 200 years of activity this year, and, after a major refurbishment will be opening its doors to everyone from the end of June to visit the redesigned and Covid safe interior.