Komedy in the Kiln! 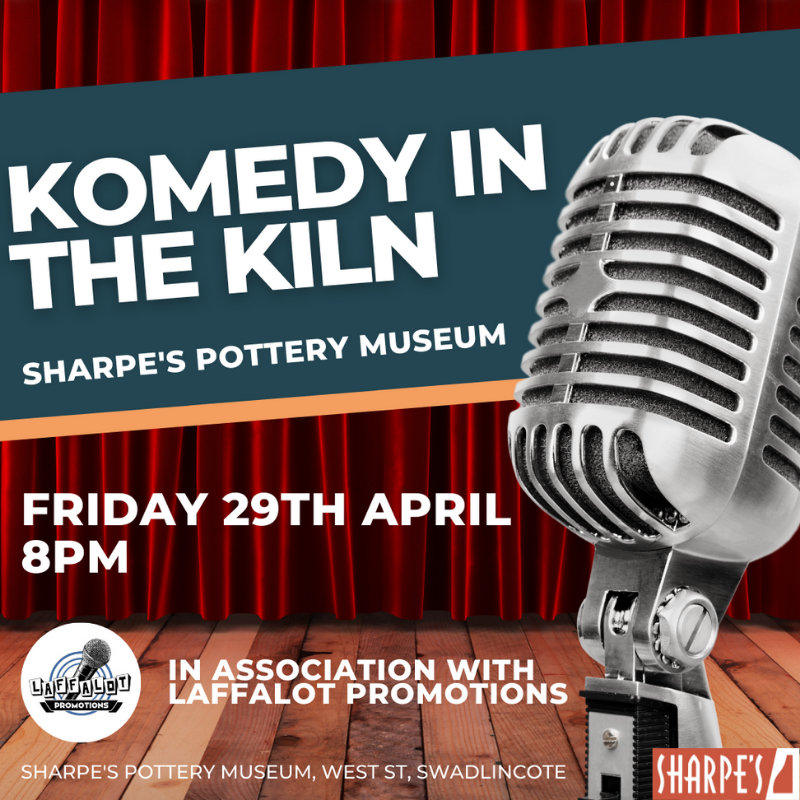 Introducing Komedy in the Kiln! An evening of comedy in the Kiln in association with Laffalot Promotions! Featuring Paul Savage, Adele Cliff and John Newton! Snacks and drinks will be available from Sweet Caroline at Sharpe’s from 6pm and during the interval. Tickets £15 per person. Booking essential!

Paul is an award winning comedian and cartoonist. He’s had 7 sell out Edinburgh shows, sell out runs at the Adelaide Fringe and Melbourne International Comedy Festival, and has performed all over the UK. In 2017 he won “Top 10 Jokes of the Edinburgh Fringe” award from The Guardian, The Mirror, Esquire, Shortlist and The Week. He’s widely regarded as one of the sharpest MC’s on the circuit.

Adele is the reigning/pundisputed UK Pun Champion (2020), the first woman to win the title and she is the only person to be named amongst Dave’s Funniest Jokes of the Fringe four years running (2016, 2017, 2018, 2019). An accomplished joke writer Adele has also featured in best jokes lists in The Telegraph, The Evening Standard, The Irish Times, The i Newspaper and The Metro as well as being nominated for Leicestershire’s Favourite Joke in 2019, and contributing to the Leicester Comedy Festival’s All Puns Blazing Joke book.

Adele has performed stand up shows at the last 5 Edinburgh Fringe Festivals. Her most recent show Undershare (2019) was at iconic fringe venue the Tron and sold out throughout it’s run, this followed her sell out, debut hour Sheep (2018). As well as stand up Adele has performed improv with improv legend Tony Slattery’s improv chums and been a regular at Edinburgh based panel shows including Battle of the Superheroes, Questing Time, The Video Game Gameshow and Roast Battle.

Adele has provided tour support for Milton Jones and twice been names one of Funny Women’s One’s to Watch. She has gigged internationally in Australia, at the Adelaide Fringe 2020, and in the USA at clubs in Chicago and New York, including The Laugh Factory, Zainies, The New York Comedy Club, Broadway Comedy Club and The Second City where she also trained in improv and sketch writing.

Adele has been heard on BBC Radio 4 extra and BBC Radio 5 Live and performed live on the BBC Edinburgh Fringe main stage, as well as guesting in podcasts including Mystery on the Rocks and BBC Knock Knock. Her writing credits include BBC Radio 4’s The News Quiz and Newsjack.

John Newton does not require gimmicks or stage characters as he has something more valuable to any comedian, brilliantly crafted original jokes” – funny.co.uk. John began his comedy career in January 2003.  A stalwart of the circuit, he fast became known for his inventive writing, covering a wide spectrum of subjects from the surreal to the hard hitting. He’s played all the big weekend clubs including; The Glee, Up the Creek, Frog & Bucket, Jongleurs, The Comedy Lounge, Highlights, Komedia, The Stand.

A regular for OTK, Castle Comedy, The Comedy Club Ltd, Mirth Control, FunnyBones, Stand-Up Comedy Club, Laughing Horse, Centre of Mirth, Ted Talent amongst others. John is also a veteran of the Cruise Ship circuit. He has played over 50 cruises including The Ventura, Oceana, The Arcadia & Ocean Village 1 & 2 , also a regular at the Sensatori 5 star holiday resorts in Crete, Cyprus, Egypt, Turkey, Ibiza and Rhodes. John remains a very strong and versatile act with probably the highest gag rate of any comic playing the UK circuit today.