Komedy in the Kiln 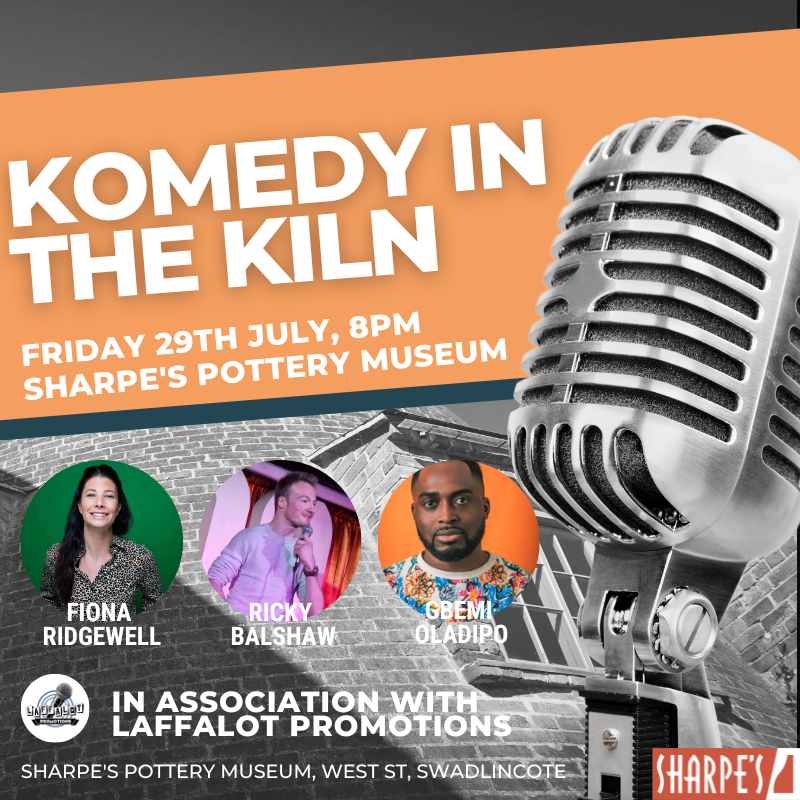 An evening of ‘Komedy in the Kiln’ in association with Laffalot Promotions! Featuring Fiona Ridgewell (MC), Ricky Balshaw and Gbemi Oladipo!

Snacks and drinks will be available as usual from Sweet Caroline at Sharpe’s from 6pm and during the interval. Tickets £15 per person. Booking essential!

We are excited to introduce you to this months acts!

Fiona Ridgewell is an upbeat conversational comedian. In February 2020 her show “Contender” was nominated for best debut show at Leicester Comedy Festival; in the same year she was a Funny Women Finalist. “Fiona has a direct cheeky sense of humour” Steve Bennett Chortle / “Fiona Ridgewell has funny bones and an easy warmth on stage.” Julia Chamberlain

Ricky Balshaw has just won Midlands Best Newcomer 2021 as well as getting through to the BBC New Comedy Awards semi final. He has just done his first solo show at the Leicester Comedy Festival and will be taking it to Brighton and Edinburgh Fringe later in the year. Recently described as the most exicting up and coming comedian in the UK – by his Mum

Gbemi Oladipo is guaranteed to lift the mood in any room and is one of the most talked about break out comedy names for 2022. An exciting new voice, he tantalises his audiences with his charismatic and playful approach to contentious topics. He regularly plays prestigious rooms such as Top Secret Comedy Club, Comedy Store and Up the Creek. Winner of Broadcast Digital Award – Best short Form Format, Max Turner Prize Winner, The Comedy Store King Gong Winner, The Blackout up the Creek Winner and BBC New Comedian of the Year Nominee.

Don’t miss out and book your tickets now!